Increased appetite for plant-based meat alternatives from both retailers and consumers has promoted manufacturers to rapidly boost the availability of more affordable meat and dairy alternatives fuelling predictions the nascent sector could account for half of the total global protein market by 2050.

That is the conclusion of a new report this week from FAIRR investor network, which found that alternative protein companies making plant-based meats raised $1.7bn in the first half of this year, demonstrating a stable growth rate of two per cent compared to the same period last year.

The report was conducted with support from 84 leading investors, such as as Columbia Threadneedle Management Limited and Amundi, as well as retail giants Walmart and Tesco.

FAIRR found that alternative proteins were seen to provide a unique investment opportunity as they combined environmental stewardship with impressive financial returns, which it said was reflected both in the steady growth rate of the industry as well as the increasing number of investors ramping up their research into plant-based meats.

Overall, the number of investors setting targets to increase their investment in plant-based products was found to have increased. FAIRR found that 35 per cent of retailers engaged with the report have committed to increasing the volume or sales of meat and/or dairy alternatives, an increase from 28 per cent of companies last year and no companies in 2019.

"From precision fermentation to plant-based meatballs, innovation in alternatives to meat is disrupting the commodities market and bringing new, more sustainable choices to consumers," said Jeremy Coller, chair and founder of the FAIRR Initiative. "Combined with inflation that is driving the price of traditional meat and dairy up at a quicker rate than alternatives, we are starting to see a world where plant-based meat and dairy is just as affordable as conventional animal-based products."

The report predicted that plant-based proteins and meats could reach parity with conventional meats in terms of taste, texture, and cost between 2023 and 2031. As such the alternative protein market is now forecast to represent 10 to 45 per cent of the total protein market by 2035, and 25 to 50 per cent by 2050, as the agricultural commodity market fundamentally transforms in pursuit of net zero goals.

The gap between the price of plant-based meat and dairy alternatives and their traditional counterparts is also closing, with inflation disproportionately impacting livestock-based products.

In the UK, for example, the cost of Oatly oat milk has fallen from almost 2.5 times higher than dairy milk in 2019, to just 12 per cent higher per litre today, the report showed.

The research also revealed that the average price per unit of plant-based meats has increased by three per cent this year, compared to a six per cent increase for conventional meat.

The research also assessed food-tech start-ups development plans and revealed how fermented-enabled protein could become the next preferred alternative food technology, with food-tech companies allocating significant amounts of their research and development budgets into this area.

In addition, the study highlighted how retailers are ramping up efforts to increase the affordability and accessibility of plant-based meat and dairy products. For example, it detailed how food giant Mondelez is launching a plant-based Philadelphia cheese at the same price as its dairy version, while Walmart has introduced a number of plant-based products into its 'Great Value' brand.

FAIRR said that more innovative and affordable sustainable proteins are likely to become a key resource in tackling future climate related security issues. According to the IPCC, projected future climate change will increasingly impact food security and the reduction of meat consumption is suggested as an adaptive measure as it reduces pressure on land and water while also helping to curb greenhouse gas emissions.

Food companies are also under growing pressure from investors and regulators to set Scope 3 supply chain emission targets and disclose progress against such goals. According to FAIRR, nearly two thirds of the large food businesses it analyses have now set science-based Scope 3 emissions goals, with 70 per cent setting net zero commitments.

However, only 50 per cent of these net zero commitments cover Scope 3 emissions, and with animal agriculture accounting for approximately 33 per cent of total greenhouse gas emissions, FAIRR said all companies must "robustly address" their greenhouse gas emission linked to animal-derived products if they intend to reach their carbon reduction goals. As such, alternative proteins could soon play an increasingly visible role in the sector's decarbonisation efforts.

Tracking the transformations needed for a more equitable world 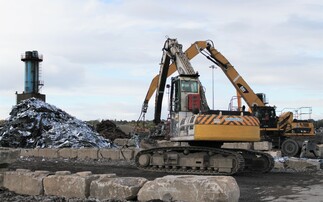