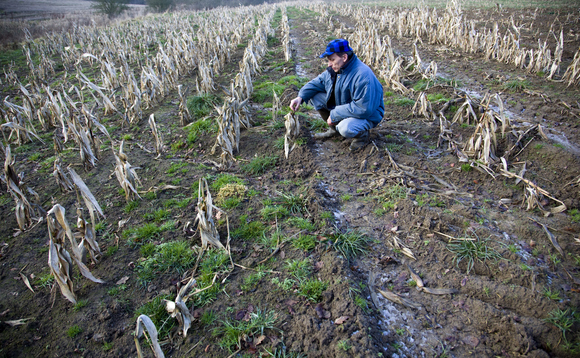 The disastrous droughts, heatwaves, and floods seen around the world's major crop-producing regions this summer have slashed harvest forecasts, pushed up food prices, and exacerbated hunger, prompting scientists to this week warn of a looming "multi-breadbasket failure" driven by escalating climate impacts.

Many parts of the Northern Hemisphere - from the USA and Europe to India, Pakistan, and China - have in recent months suffered from the devastating impacts of record-breaking extreme weather events, which were made far more likely to occur due to climate change.

The extreme weather comes on top of significant food commodity supply chain disruption as a result of Russia's invasion of Ukraine and successive failed harvests in already food-insecure regions such as the Horn of Africa, which is expected to suffer its fifth failure of the rainfall season in a row, leaving more than 20 million people in the region at risk of being pushed into emergency hunger levels.

According to a new briefing paper this week from leading scientists and food security experts, the latest climate impacts have had a multitude of impacts on the global food supply chain, heightening world hunger levels thanks to failures across many affected "breadbasket" regions, and further underscoring the instability of the global food system.

At present, 345 million people worldwide are facing acute food insecurity, a huge increase over the past three years from 135 million people in 2019, according to the United Nations World Food Programme.

Zia Mehrabi, assistant professor in the department of environmental studies at the University of Colorado Boulder in the USA, warned that climate change posed "a major threat to our food systems".

"We know that extreme events will get worse in the future and we'll see them happening across multiple regions at the same time," she said. "Doing nothing on climate change today puts our children's future at risk. We are already seeing multiple hazards threatening crops, livestock and fisheries and this is something that is not going to go away unless we get serious about climate change, and fast."

A briefing on the vast scale of weather and food impacts this summer released by scientists earlier this week lays bare the scale of the risks facing the world's food system.

In Europe, 47 per cent of the continent is currently under official drought warnings following a summer of heatwaves that have sent weather records tumbling, resulting in record low water levels and below-average corn and grain yields, it notes.

The US, similarly, has also suffered major agricultural losses as a result of drought this summer, in some cases forcing farmers to sell off their livestock to make up for financial losses from crop failures. The US is the world's top corn producers, yet its 2022 harvest is expected to be the smallest since 2019.

Meanwhile, with around a third of Pakistan at one point under water as a result of devastating floods, the country's rice harvests are expected to plummet by 31 per cent this year, with huge international consequences given it is the world's fourth largest exporter, the briefing warns.

In India, too - the world's biggest rice exporter - it states that production has been severely curtailed due to extreme temperatures and drought that have shrunk the country's rice farming area by eight per cent compared to last season.

Other non-climate driven, geopolitical events have also had a major impact on global food supplies, most notably Russia's invasion of Ukraine, which is one of the world's biggest producers of wheat.

Gernot Laganda, director of climate at the UN World Food Programme, said climate change was an "important driver" of the current increase in global hunger.

"Communities on the frontlines of the climate crisis are struggling to cope with extreme weather events, which are following each other at increasing speed," he said. "Right now, we are feeling the impacts of this concentration through the food price inflation that comes in the wake of political shocks, such as the Russian invasion of Ukraine - but concentrated food and energy systems are an equally risky strategy in a changing climate."

Currently 80 per cent of the world's population depends on just three agricultural commodities - maize, wheat, and rice - the production and trade of which are largely controlled by a small number of countries. Crop models show that yields of these crops could decline significantly by the end of the century thanks to the impacts of climate change, Laganda explained.

"Yet we keep buying into a system of fewer crop varieties that are produced and transported with a high carbon footprint and costs to the environment, rather than capitalising on the genetic diversity that is still available in many countries and that could help us make our food systems more resilient to external shocks and stresses," he said.

"Current humanitarian needs are rising at an unprecedented rate, but this all will seem small if governments fail to act on emission reductions, climate protection and risk management."

How dangerous climate tipping points are 'likely' to be triggered in a 1.5C world