'Now is the moment': Alstom reveals how the UK could pull ahead on hydrogen

BusinessGreen sits down with Nick Crossfield, managing director of Alstom UK and Ireland, to discuss why hydrogen could hold the key to decarbonising the UK's railway network by the government's 2040 deadline

Some 200 years after the UK's coal industry spurred the development of the world's first railway network, a different fuel could once again establish the country as a major hub for train innovation.

That's according to Nick Crossfield, managing director of Alstom UK and Ireland, who claims the UK has huge potential to become a world leader in the race to develop hydrogen trains as the country works towards its goal of decabonising its rail network by 2040.

"If you go back 120 years, Britain was a leading light in the development of railway transportation," Crossfield tells BusinessGreen. "There is an engineering legacy that can support the country continuing to occupy that leading space in the race to develop decarbonisation technology that can be sold and transported across the rest of the world."

Hydrogen traction for trains is a "frontier-type technology", according to Crossfield, one in which the UK could lead due to its legacy of rail innovation, its abundance of water and wind - two key ingredients in the production of green hydrogen fuel - and its network of long-distance regional railways that remain difficult to electrify. But beyond pilot projects, there are currently no hydrogen powered trains in the UK.

Alstom, which launched the world's first new-build hydrogen passenger rail fleet in Germany in 2018, wants to change that. It has spent nearly three years working with UK rolling stock company Eversholt Rail on a pioneering hydrogen train conversion concept that retrofits fossil fuel powered trains with hydrogen fuel cell technology. The UK was the obvious place to launch such a product, Crossfield explains, due to the country having a relatively young train fleet that will require conversion to operate past the government's emissions deadline.

Despite a rolling electrification programme over the past 60 years, roughly 60 per cent of the UK's train fleet remains powered by fossil fuels. The country has a tangle of long-distance regional routes less amenable to electrification, due to the significant cost of overhead line electrification infrastructure and the cumbersome weight of batteries that would be necessary to power trains over such long distances.

This is where hydrogen comes in, according to Crossfield. Hydrogen trains do not require heavy batteries and can travel roughly 1,000 kilometres between refuels. "Electrification is for very high speed major trunk routes," he explains. "Hydrogen is an ideal solution for these regional railway routes."

Furthermore, Crossfield stresses, development of hydrogen infrastructure at major centres of population at either end of such regional routes could have a catalytic effect on hydrogen uptake in other sectors across the UK's regions, such as road transportation and heavy industry. "The trains themselves will create solid, predictable demand that allows you to piggy back other things on top," Crossfield predicts.

Alstom and Eversholt's 'Breeze' technology is, for now, specifically centred on reengineering class 321 trains built by British Rail Engineering Ltd between 1988 and 1991. But the hope is that the concept can be rolled out to other models and exported globally after successful deployment in the UK. "The government has made a great play of saying 'we want to be a high technology economy', 'we want to be a pioneer in some of these new, green technologies', 'we want to be seen as a credible technology partner that can export to the rest of the world'," Crossfield emphasises. "Hydrogen is a prime example of where the UK could play a leading space."

But despite these odds and months of  discussions with Alstom about the Breeze concept, the Department for Transport (DfT) has not yet placed an order for the trains - a decision-making process that Crossfield admits has been "frustrating and slower than expected".

Typically, a fleet order would come from the Train Operating Company, but it would have to be sanctioned and supported by the government. But in the wake of the coronavirus pandemic and the government's decision to place all rail franchises under state control, the government is an even more important stakeholder than it was before, with any order likely to come directly from the DfT.

While 2040 may seem a long way off, Crossfield emphasises that the government must act soon to order a hydrogen fleet if it is to use the technology to meet its 2040 ambition. The first order would take Alstom and Eversholt roughly three years to fulfil, he predicts, meaning that the government doesn't "have that long between 2024 and 2040 to crunch through what could be near enough 2,000 vehicles".

Despite the UK's many competitive advantages and the fact that the Breeze technology is "shovel ready" after major investments from Eversholt and Alstom, the government's sluggish approach could mean its hydrogen sector ends up being trumped by those of its European neighbours, warns Crossfield. Germany has made two fleet orders for new build hydrogen passenger trains from Alstom and Italy and France are "poised" to make their first orders, he says. And last week, Austrian Federal Railways (ÖBB) launched a 10-week trial of Alstom's new build hydrogen train on Alpine routes in the country's northeast.

"Compared to regions like Germany and Italy, two of the leading lights in Europe, the processes here seem slower, more drawn out, the decision making seems more complicated," Crossfield says. With technology cycles shrinking for green technologies as more resource is invested in driving the net zero transition, the government cannot afford to delay, he adds.

"Our reading of the situation, certainly where the government is involved, I'm not sure they see how compressed those tech cycles are," Crossfield muses. "If you don't take decisions, you don't step in at that point it time, you miss the wave and are out until the next wave".

"We've been working on this for three years," he stresses. "We are now at a point where we've done everything the government has asked us - engineering, proof of concept. Altrom and Eversholt are two private companies and we have a duty of care to shareholders. We've spent £2.5m jointly getting this in place. This is the point where the government needs to commit."

The government has repeatedly suggested hydrogen will play a major role in its plans to drive a green recovery to the coronavirus, with the Prime Minister backing plans to "invest massively in hydrogen" and top cabinet members visiting some key sites for the UK's nascent hydrogen economy over the summer.

But the government has faced growing calls to back its hydrogen-friendly overtures with measures that can support the emerging industry and follow in the footsteps of Germany, South Korea, Canada, Japan, and the European Union in setting out a clear strategy for stimulating hydrogen fuel technologies, production, and distribution. UK trade bodies, including the Hydrogen and Fuel Cell Association and RenewableUK have called for a "clear, strategic plan" for the development of a nationwide hydrogen economy, and cross industry campaign group Hydrogen Strategy Now - of which Alstom is a member - claims that it has £1.5bn ready to invest in hydrogen once the government sets out its strategy.

In August, Environmental Audit Committee chair Philip Dunne warned Business Secretary Alok Sharma that the UK's lack of a hydrogen strategy is "holding back efforts to make scaling hydrogen production a reality" and called on the government to make such a strategy a pillar of the long-awaited National Infrastructure Strategy, which is expected this autumn. A debate on the need for a hydrogen strategy has been scheduled for the House of Lords on 17 September.

While there will inevitably be "structural strategic costs" to introduce the first fleet order of 'Breeze' trains on British tracks that would have to be supported or underwritten by the government, prices are set tumble quickly as the technology matures, according to Crossfield. And, he stresses, any up front investment will pay off in the long run. In Germany, Alstom predicts that its new build hydrogen trains will become cheaper than their diesel counterparts within 12 years - less than a third of the way through their 40-year life span.

And does he think the 2040 target is ambitious enough? Crossfield says he is sure that decarbonisation of the railway could be done "a lot quicker" if there was a clear plan from the government. "But it goes back to the speed of decision-making," he reflects. "Now is the moment, if they are to achieve it by 2040 or earlier, they have to now start taking the decisions to implement the first fleet orders."

Our green future won't materialise unless we create its workforce 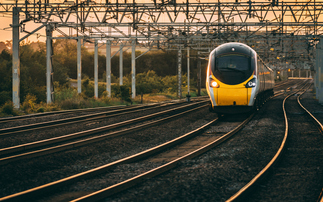