Evian's vice-president of brand Shweta Harit talks to BusinessGreen about the French water company's sustainability ambitions, in particular a pledge to use 100 per cent recycled bottles by 2025.

While achieving a circular economy is an important goal for all brands, it is particularly pertinent for Evian, where circularity has long been a cornerstone of the brand, says Shweta Harit, global brand vice-president of the French water company.

"Think about it - every year we get Evian water, and then it goes back into a cycle again, and then we get the water the following year," she tells BusinessGreen in an interview last month from her Paris apartment. "The snowfall of this year takes 15 years to become Evian water. The concept of circularity and cycle has long been a part of the brand."

While it remains to be seen whether Evian's reliance on alpine water cycles will give it an advantage when it comes to achieving its corporate goal of becoming a fully circular business by 2025, there is no doubt that the task ahead is onerous. The company now has less than five years to deliver on a pledge made in late 2018 that involves the organisation weaning itself off virgin polyethylene terephthalate (PET), which has dominated the bottled water market for decades and is created through petroleum combustion, in favour of recycled plastic, or rPET, which is in short supply due to poor recycling rates and, more recently, coronavirus-related disruptions.

Harit argues the company's recent success in achieving 'carbon neutral' status, awarded by the Carbon Trust in April, is an important stepping stone towards the firm reaching its longer-term '100 per cent circularity' pledge. "Becoming  a brand that leaves no footprint - I think that's the ultimate goal for any brand in the world, when you have your entire operations, your commercial business, but you leave no trace," she says.

The circularity target requires technological innovation that delivers higher grade recycling than exists at scale today, as well and better recycling practices and services, Harit says. The Ellen MacArthur Foundation, The Ocean Clean Up project, Veolia, and a chemical recycling start-up called Loop Industries are just some of the companies and organisations working with Evian to help deliver this circular innovation.

As such, Harit says she expects Evian to reach its 100 per cent recycled bottle goals sooner than expected. "We're at 30 per cent rPET already, and if this year had gone better, we would have been closer to half," she explains. "But this year, we had a lot of plans, and it has just been an awkward year. A lot of our business relies on hotels and we have had a tough year." Indeed, Evian intended to roll out 100 per cent rPET across its smaller product line in the UK this spring, but the move has been delayed by the pandemic. The milestone is now expected for later this year, although bottles on British supermarket shelves are already labelled 'bottles made from bottles'.

Moreover, even before the coronavirus hit recycling collection processes, a shortage of available recycled plastic has presented a major challenge for the growing number of companies looking to ditch virgin plastic - and in particular food and drink companies, which require a higher grade of recycled plastic. A report from commodities analyst S&P Platts in October warned that some of the unfavourable economics found in the recycled plastic market would test companies' sustainability commitments. At the time, the cost of recycled PET flakes had overtaken the price of virgin plastic spot prices, for the first time since the analyst started comparing the materials in 2008.

Harit says Evian is working with governments to improve recycling strategies in order to plug the "leak" in the circularity cycle. At the same time, she hopes that parent company Danone's partnership with Montreal-based Loop Industries, which has been developing a  chemical approach to recycling PET waste plastic that results in virgin-quality plastic, will drastically boost the amount of available recycled material. Danone has a deal to purchase Loop-branded PET from a plant currently under construction in South Carolina and has designated boosting access to recycled materials as a key goal across the food giant's business.

At the end of the day, Harit muses, there is always "friction between doing right for planet and profit", and it is up to senior management to enshrine sustainability as a corporate priority. In Evian's case, she says Danone chief executive Emmanuel Faber's leadership has played an essential role in steering Evian's ambition.

"There is a friction and I think that friction should exist because we are a commercial business, we are not an NGO," she says. "We are here to make the right profit for our shareholders. It's just, what does it come down to as a business or a brand? As a brand that really owes everything to nature, I don't see how we can operate in any other way."

As plastic waste is increasingly seen by consumers as a scourge on oceans and ecosystems, and refillable water bottles boom as environmentally-conscious consumers look to curb their plastic footprint, marketing bottled water has become more challenging. But Harit is hopeful that Evian's suite sustainability goals will allow consumers to focus on the water that Evian sells, not the receptacle that it is contained in.

"We are a water company," she reflects. "Plastic is just a container. If I could find a solution, believe me, I would be on it. I have to take responsibility of that container... I value what is inside. I'm trying desperately to move to shift the value back inside."

Indeed, the bottled water industry has come a long way since the invention of PET catalysed the industry in the 1980s and 90s. The lighter, stronger and recyclable bottles coalesced with marketing campaigns that emphasised bottled water's health and skincare benefits to spur a meteoric rise in sales that continued for decades. In the US alone, between 1990 and 1997 sales of bottled water in the US rallied from $115m to $54bn.

However, the material that catalysed the bottled water industry's extraodinary growth may, ultimately, contribute to it falling out of favour. Trade outlet the Grocer reported in March that sales of water bottles in the UK fell for the first time in five years in 2019, while sales of reusable bottles skyrocketed.

Now Harit predicts the drop in greenhouse emissions incurred by the Covid-19 lockdown will only heighten consumers' desire to shop in a way that does not harm the planet. "People are really going to want to know more about their brands and what they are are buying," she predicts. "We believe that every act of purchase is like a vote, so vote for the brand that is taking care of the planet."

If purchasing is a vote, Evian's shiny new 'carbon neutral' achievement, awarded in April, is a compelling policy. The company achieved its goal - set out more than four years ago at the landmark COP21 Paris climate conference - following a €280m upgrade to its French bottling factory, which allows the company to produce 500 million more bottles a year while delivering a 90 per cent reduction in carbon emissions. A programme of carbon offsetting, light weighting of bottles and the company's ongoing transition to recycled plastic also moved Evian closer to the milestone. The company, which owns one of France's largest private train stations, has also increased its reliance on shipping by rail.

Ambitious public goal-setting is crucial for companies looking to get serious about climate change, Harit argues. "I love big hairy goals, because once you have them and you have an external declaration, you have no other way to go," she says. "With a public announcement, you have no way to hide, and the organisation starts to take it seriously, starts to align people. Because we need experts. We don't know everything, we work with a lot of people."

And if the aim of a goal is to make a difference, then it might as well be ambitious. "Setting yourself a goal that is a little 'out there', works for me as a person and as someone leading the brand," Harit continues. "Have big ambitious goals, because otherwise, anyone can do it. And what's the point of that?" 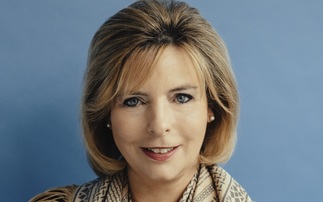 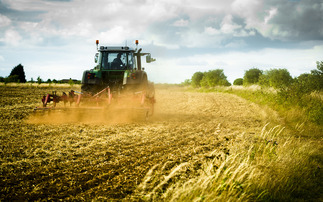 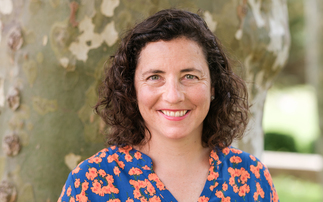