The climate angle on 'cake-gate' 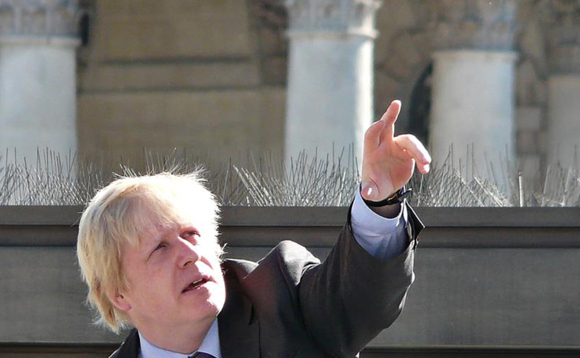 They may be glossed over amidst the drama gripping Westminster, but the crisis gripping Number 10 could have significant and worrying implications for the climate agenda

A deadly pandemic, a gathering sense of looming economic and geopolitical catastrophe, and an utterly detached elite with delusions of grandeur; for Number 10 partying as the planet burns is evidently just the 20s playbook, now as then. But amidst all the outrage at Number 10's rule-defying tribute to the Roaring Twenties it is easy to miss the climate angle. Because there is one. In fact, there are three.

Two of the climate angles have already become part of the backdrop to the endless debates over who did or did not get "ambushed" by a birthday cake, whether or not you can have a 'work event' with your personal wallpaper consultant, and how capacious a bubble can become before it bursts.

The first is the only reason to be angry at the scandal-copalyse engulfing Number 10 that unites the Prime Minister's many outraged critics and the small band of loyalists who insist the fixation on his voracious appetite for workplace wine and cheese is overblown. There is broad agreement that the myriad interlocking controversies encircling Boris Johnson are distracting from the many hugely important challenges the UK faces. From the standoff between Russia and Ukraine and the continuing risk from coronavirus variants to the many challenges to international climate action that were highlighted this week in an important speech by COP26 President Alok Sharma that was completely overshadowed by the Prime Minister's lockdown birthday party guestlist, the most serious of issues are not getting the attention they deserve.

The second climate angle to 'party-gate' unites the Prime Minister's allies and much of the environmental movement in their fear over what might come next. Johnson boasts an impressive, if imperfect, track record on the net zero agenda, and if he is forced to resign his most likely replacements appear to be either indifferent or actively hostile to the idea of prioritising climate action. Liz Truss is openly flirting with the libertarian, climate sceptic right of the party, while Rishi Sunak's fiscal conservatism is the primary reason Johnson failed to deliver a meaningful green stimulus package.

Meanwhile, the small but influential band of climate denialists in the Conservative Party clearly see the combination of leadership turmoil and soaring gas prices as offering a once in a decade chance to torpedo climate action. They are desperately working to revive their vision of enhancing the UK's 21st century competitiveness by expanding the use of the polluting fossil fuels that pretty much every government and major business in the world has said they want to phase down.

There is a very real risk that an early end to the Johnson administration could deal a major blow to the UK's net zero strategy and lead to the dilution of a raft of crucial decarbonisation policies that are currently in the pipeline. Johnson would have helped deliver important progress on offshore wind power, electric vehicles, natural carbon sinks, and clean tech and green financial innovation. But the unique opportunity offered by a Conservative Prime Minister with a stonking majority who is keen to prioritise climate action, a man who had the 'Nixon to China' cover to push through bold policies that would otherwise face fierce political and media opposition, would have been largely squandered.

However, there is also a third climate angle to 'partygate' that is much less forgiving of the Prime Minister and only adds to the seemingly never-ending list of reasons that his premiership is becoming untenable.

The reason Johnson failed to deliver a meaningful green stimulus, the reason the Net Zero Strategy was repeatedly delayed and still lacks so many crucial policies, the reason the Green Homes Grant descended into chaos, the reason rivers are being inundated with sewage are the same reasons that Johnson currently finds himself at risk of being defenestrated by his own MPs: a singular lack of seriousness and focus.

Johnson could have built the alliances and internal party coalitions that would have allowed for a still bolder net zero and levelling up strategy. He could have made and won the case for a proper post-pandemic stimulus package to actually deliver on the crucial twin priorities of his government. Instead, he found himself looking isolated, even before he chose to torch his political capital in defence of first Owen Paterson and then the many parties he must have known he had attended.

More broadly, it is near impossible to see how any political leader can drive a project as fundamental and era-shaping as the construction of a net zero emission economy without a combination of seriousness, focus, and, crucially, trust. Johnson's 'one rule for us, another rule for them' philosophy and steadfast refusal to recognise he has done anything wrong is not just enraging to the millions of people who followed the rules, sometimes at the greatest expense, it is also anathema to the idea of a grand, uniting national project. Johnson's arguments in favour of an accelerated net zero transition may be compelling, but how can he expect to get a hearing for something so serious when his administration is now so clearly associated with rule-bending birthday cakes and broken swings?

These are the climate angles on the crisis gripping Number 10. They risk turning a fiasco into something closer to a tragedy.