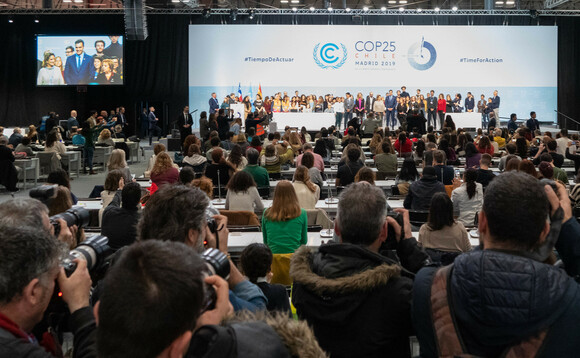 As fears of a 'COP flop' get an airing, the battle to define what constitutes a successful Glasgow Summit is hotting up

COP26 is having its first major wobble. This might seem like a slightly strange assessment for a Summit that has seen its first President unceremoniously sacked and replaced, been subject to a pandemic-induced postponement, faced calls for a second postponement, and experienced funding rows with the Scottish government, fierce criticism from developing nations over 'vaccine apartheid', accusations of over-selling from corporate sponsors, and long-standing allegations of prime ministerial detachment and diplomatic naivety. Hasn't the high stakes caravan been wobbling since the get go?

But most of the dramas surrounding the Summit to date have related to either the logistics or domestic politics. The critical question as to what COP26 will actually achieve has remained largely unaddressed, with the absence of in-person preliminary meetings meaning the various deadlocks and flashpoints that characterise every UN climate summit have been kept largely under the radar.

Now, with just days to go until the Summit kicks off attention is belatedly turning to what might be agreed and what success looks like - and some people are not liking what they find.

Yesterday's reports in The Sun that COP26 President-designate Alok Sharma is "raging" at Prime Minister Boris Johnson over the lack of expectations management for the Summit lays bare a fundamental challenge that has been faced by every host a Climate Summit since the negotiations began back in the early 90s - different interests have very different definitions of what constitutes a successful COP.

Going in to COP26 there are four distinct but overlapping areas for gauging the Summit's success: logistical, practical, global, and technical. What constitutes success on each of these fronts inevitably depends on interpretation, but the problem for the UK hosts is the areas where the line between success and failure is most unequivocal are also the areas where it is hardest to secure an agreement.

On the logistical front, there are reasons to be cautiously optimistic, while guarding against overconfidence.

There have been complaints over soaring hotel costs and shoddy sponsor engagement, while concerns are running high over everything from Covid outbreaks and rail strikes to the prospect of disruptive protests and appalling weather. Organisers are painfully aware of how logistical woes became a leitmotif for the diplomatic disaster of the Copenhagen Summit. The lesson of COPs past is that having to stand for hours in queues for security or being unable to easily find halfway decent food inevitably leads to frayed tempers. But the government is quietly confident it has learnt such lessons and can orchestrate a successful meeting. Meanwhile, reports yesterday that India's Narendra Modi is to attend, means China's President Xi and Russia's President Putin are set to be the only high profile 'no shows'. Over 100 world leaders are now expected to make an appearance during the first week, along with thousands of top Ministers and diplomats, and this week's publication of the Summit's official programme confirmed there will be plenty of events to keep them entertained.

The various theme days for COP26 also point to how the government can be confident it will chalk up a significant number of practical successes.

Part of the reason the Prime Minister has been so bullish at the prospects for the Summit is that he knows a wave of announcements are in the pipeline that will provide a major boost to global decarbonisation efforts. His sloganeering desire to see progress on "coal, cash, cars, and trees" is likely to be fulfilled, albeit partially.

A significant number of countries will reiterate pledges to phase out coal power or end coal financing. Hopes that the totemic target of delivering $100bn a year of climate finance for poorer nations can be delivered may have been tempered by reports yesterday that the US is yet to sign off on a deal that would ensure the goal is met, while the UK's decision to cut Overseas Development Aid has not helped build goodwill among poorer nations. But there is confidence an agreement is within reach that would see the $100bn of long-promised cash finally delivered. On cars and trees there will not be a universal agreement to consign the internal combustion engine to history and expand forest cover, but there will be plenty of eye-catching and encouraging national commitments on both fronts. All these various announcements will be accompanied by a veritable battalion of corporate and investor-led initiatives and commitments, all of which should help to catalyse a continued expansion of real world decarbonisation efforts.

The problem for a Prime Minister who likes to declare victory at every opportunity is that as the Summit enters its dramatic denouement the focus on welcome national or industrial commitments will inevitably shift to the technical nitty-gritty of the talks, and it is here that the hosts only have so much control over the outcome.

The two primary benchmarks for the success of the Summit are whether it starts to move emissions trajectories into line with global goals - that is to say whether it, in the words of Alok Sharma, 'keeps 1.5C alive - and whether it finalises the technical rulebook for the Paris Agreement.

Against this first metric there is reason for some qualified optimism. Sharma may have faced criticism from an unnamed Cabinet colleague who argued the public has no idea what 'keep 1.5C alive' means, but all the participants in the talks know exactly what the goal is and there is a powerful coalition that supports it.

The recent wave of net zero pledges from leading economies represents remarkable progress since the Paris Agreement was signed and suggests the global emissions curve could start to be bent downwards over the coming decade. If President Biden convinces people he can still deliver credible decarbonisation plans in defiance of the blocking tactics of Senator Joe Manchin, if India strengthens its national climate action plan, if China comes to Scotland armed with information on how it intends to meet its net zero by 2060 target, then it is possible to envisage the Glasgow Summit closing with fresh projections showing that temperature increases could be kept to around 2C this century. Whether such a plan keeps 1.5C alive then becomes a judgement based on how optimistic you are feeling about emissions trajectories for the coming decade, the prospect of countries strengthening decarbonisation plans further in five years' time, and the plausibility of negative emissions projects.

The hosts will want to put an optimistic spin on the surge in national net zero commitments, highlighting rightly how the ratchet mechanism contained in the Paris Agreement is working and climate action globally is accelerating. Campaigners and many of those countries facing the worst climate impacts will counter that global emissions are still rising, that there is still no credible plan to limit warming to 1.5C, and that as such the Summit has singularly failed to deliver on its goals.

The context against which this argument will play out will be provided by the most clear cut mechanism for gauging the success of the talks: whether or not agreement is reached on the technical rulebook for the Paris Agreement. As Ed King expertly explained earlier this week, the talks have been deadlocked for years on three crucial topics: transparency mechanisms for assessing whether countries are delivering on their national action plans; common timeframes for updating and assessing national plans; and Article 6 of the treaty covering carbon market rules.

The tense round-the-clock negotiations on these issues will be informed by perennial disagreements over the extent to which poorer and richer nations should be treated differently - an always contentious topic that got an early airing this week when the 'like-minded' group of major emerging economies issued a broadside at the British hosts arguing that they should not be calling on poorer nations to embrace net zero by 2050 targets that are the same as those adopted by industrialised economies.

"Major developed countries are now pushing to shift the goal posts of the Paris Agreement from what have already been agreed by calling for all countries to adopt net zero targets by 2050," they wrote. "This new 'goal' which is being advanced runs counter to the Paris Agreement and is anti-equity and against climate justice."

This is why some of those involved in the talks are so worried about expectations management. The last COP in Madrid ran over time by more than 40 hours and still did not secure an agreement on finalising the rulebook. The preliminary talks for COP26 that are meant to ascertain where compromise might be possible and 'landing zones' might emerge have been hugely disrupted by covid. Many of the key players feel, with considerable justification, that developing economies are victims of an appalling injustice. Meanwhile, as Unearthed revealed today, some of the world's largest polluters are quite happy engaging in spoiling tactics as they work to protect their narrow short term interests and water down any agreement. With every year that passes the way in which the Paris Agreement managed to secure universal backing looks like one of the most staggering diplomatic achievements in modern history. It is a tough act to follow.

An historic breakthrough remains possible. The Summit will deliver huge steps forward for efforts to decarbonise the real economy. The normalisation of net zero strategies will ensure the viability of the temperature goals contained in the Paris Agreement remains a subject of legitimate debate. The overarching signal to businesses and investors will be that the net zero transition is irreversible and building momentum. Brinkmanship, backroom deals, and fudged comprises could yet secure a technical agreement. But equally, deadlocked negotiations could easily overshadow the progress made on other fronts and fuel the perception that the whole exercise has failed to deliver on its core goals.

That is why sky-high expectations and a failure to properly explain what the talks are trying to achieve could prove so damaging. That is why COP26 is having a wobble. And that is why we can expect plenty more raging dramas before the final gavel comes down. Success remains within reach, but what that success looks like remains up for grabs.