The paradox of Hinkley Point

The Hinkley Point project promises considerable benefits, but they risk being lost in an avalanche of criticism and justifiable concerns about the cost and timeline

It is easy to forget, amidst the inevitable avalanche of criticism the Hinkley Point project attracts, that there are considerable benefits that could result from today's long awaited approval of the highly controversial project.

The nuclear power plant in Somerset promises to deliver seven per cent of the UK's power in a base load, low carbon form over the entire period during which the country is required to almost fully decarbonise its economy. This is not an achievement to be sniffed at, even before you factor in the thousands of jobs and the potential to open the door for a new wave of nuclear reactors, which in conjunction with renewables, energy storage, smart grids, and perhaps carbon capture and storage (CCS) could deliver a near zero emission power system over the next two decades. If climate change is the defining challenge of the age, then green businesses and campaigners need to tread carefully before publicly tearing down one of the few forms of energy we have available that can deliver low carbon power at scale.

However, it is testament to the government and EDF's chronic mishandling of the Hinkley project that the benefits associated with the development are not more widely appreciated. Ministers and executives have consistently failed to successfully make the case for Hinkley Point, in large part because they have been forced to defend a deal, the rationale for which has looked ever shakier as the government's nuclear vision has been repeatedly overtaken by events.

The tragedy of Hinkley Point is that were it being delivered as originally envisaged at a strike price of around £38/MWh and in time to cook turkeys for Christmas dinner in 2017 it would represent a truly great deal for the UK. It would have plugged a looming gap in our energy supplies and kick started the UK nuclear industry in a way that would allow genuine cost competition between all forms of new low carbon power capacity during the 2020s. Plus, it would have delivered all this at a pretty affordable cost.

Instead, like inexorably rising sea levels, delay after delay after delay has eroded both the credibility and the rationale for the project. A good deal at £38/MWh in 2017 now looks like a much less attractive deal at £92.50/MWh in 2026. The eye-watering cost attached to the Hinkley Point project - reaching £37bn in subsidies over 35 years by some estimates - not to mention the on-going failure to deliver the underlying EPR technology elsewhere, should have necessitated a rethink long ago. The mounting evidence showing energy saving measures, renewables, smart grids, and storage technology could deliver clean, reliable power at a much lower cost by 2026 demands proper ministerial consideration.

Instead, the people Hinkley Point looks like a good deal for now is EDF. We can be sure of this, because the only reason the company would embark on such a development given the failure to deliver two previous EPR projects on time and on budget, the firm's well documented financial travails, the opposition of its unions, and the political and policy uncertainty unleashed by Brexit would be if the eventual financial rewards were so gargantuan they would tempt even Scrooge McDuck out of bed. We all have our price at which we are willing to take on monumental risks; £92.50/MWh is EDF's.

It would be fascinating to know what price EDF could have delivered the project at were a genuinely competitive tender process undertaken alongside other developers, but sadly that ship sailed long ago. The fear for the longer-term viability of the government's long-promised nuclear renaissance is that the pace of cost reduction in the renewables sector means the next wave of reactors will have to deliver a very steep cost reduction curve from Hinkley's precipitous starting point if they are to prove competitive.

So why is the government so keen to proceed?

Firstly, there are the politics. The defenestration of George Osborne and the promotion of Amber Rudd opened the window for their replacements to axe the project at little political cost, but a desire for continuity and post-Brexit inward investment appeared to have won out - up until the government's surprise last minute delay that is.

Secondly, there is that seven per cent of low carbon, baseload power. The reality is the government is not yet fully convinced the mix of renewables, smart grids, storage, and energy saving measures can really deliver at the scale and within the timelines required to replace Hinkley Point, especially given falling power demand trends could soon reverse if electric vehicle and heat pumps start to fly.

Again, this is, to a degree, understandable. Delivering secure power supplies is one of the government's primary duties. Green groups may point to the fact the EPR technology has never been delivered, but nor has the renewables, demand management, and energy storage nexus at the necessary scale. Those who want to see the UK economy decarbonised should be encouraged the government did not decide, thus far, to shelve Hinkley Point and replace it with yet more gas infrastructure, especially given the still shocking decision to axe CCS funding and the continued presence of plenty of pro-fracking ministers in cabinet. The surprise re-think from Number 10 means that risk is still very much alive.

Had Hinkley Point been delayed by just a few more years we would likely have reached the point where clean technologies had categorically proven that they offer a viable replacement. Many will agree with Bloomberg New Energy Finance's Michael Liebreich that we are already at that point and the Hinkley Point should now be scrapped. But the government is clearly not yet fully convinced either way, hence the surprise move by Ministers to look again at the deal until early autumn. There's everything to play for.

The net result is the Hinkley Point paradox the government and the wider UK decarbonisation effort now finds itself facing.

Ministers need the project to deliver seven per cent of UK power on time and on budget, because, as Amber Rudd admitted before leaving the Department of Energy and Climate Change (DECC) the project's failure could push up energy bills further and jeopardise the UK's carbon targets. But they also need to be ready to walk away from the project if the raft of legal and technical challenges it still faces prove debilitating.

The government urgently needs the Plan B it should have had years ago. That Plan B should return to the first principles of the electricity market reform programme and pursue genuine competition between the next wave of renewables, smart tech, energy saving measures, CCS, and next generation nuclear to deliver the optimum mix of low carbon power sources at the lowest possible cost through the 2020s and beyond. The likeliest bet remains, given current trends, that renewables, energy efficiency, and smart tech will win out, supported by some next generation nuclear and CCS for industrial processes. But it is now up to the clean tech sector to continue to prove the wisdom of this wager.

Confusingly, the government's energy priority for the next decade must be simultaneously delivering Hinkley Point, while driving rapid progress in those emission saving technologies that could yet prove the Somerset project is indeed the radioactively expensive white elephant that its critics have always claimed. In short, now the green light has been given, the UK needs to deliver Hinkley Point, while proving it never really needed it. 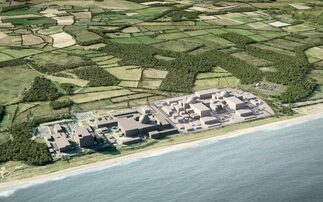