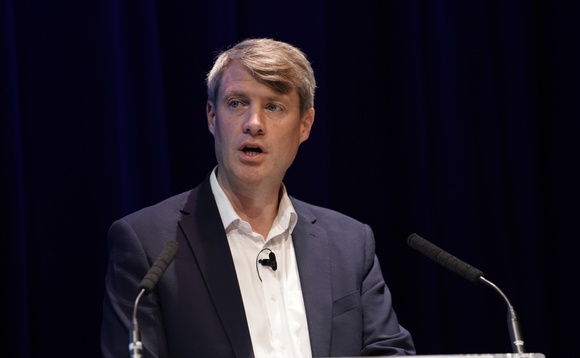 Chris Skidmore has promised there will be "no rowing back" on the UK's Net Zero Strategy or climate commitments, as the MP today launched a public call for evidence to help inform the hotly-anticipated review he has been tasked with carrying out by the government over the next three months.

Speaking at the Net Zero Festival this morning, Skidmore also insisted his Net Zero Review, and the final report of recommendations he eventually sends to the government in December, would be fully independent, and would set out the clear economic case for doubling down on the UK's legally-binding climate targets.

Skidmore said the Review was "not a moment to recoil from our climate commitments".

"So I make this pledge to you there will be no undoing of any of the existing Net Zero Strategy," he told the audience. "There will be no rowing back on any of the targets that have been set out by government. Instead, there is an opportunity to reframe them not as a challenge or a burden to people but to make the positive case for change through creating new incentives to achieve that change."

During his keynote address, Skidmore also announced the launch today of a call for evidence to inform his three-month review, as he urged businesses, local authorities and the public to speak up over how the fight against climate change should be best delivered.

The call for evidence includes 30 questions seeking views on the opportunities and measures needed to support the transition to net zero in a way that boosts growth and jobs, as well as on challenges and obstacles to decarbonisation for businesses, and how the government can do more to support companies and consumers in cutting their emissions.

"The decisions and actions we take today will impact consumers, employees and businesses alike, in cities, town and rural communities all over the country," Skidmore said in a statement accompanying the announced call for evidence. "That's why I want to hear the views of as many people as possible over the next month. I want to ensure that net zero isn't just viewed as the right thing to do for our environment, but becomes an essential driver of economic growth - and a win-win for Britain and the world."

The MP has been a staunch advocate for net zero within the Conservative Party, having set up the Net Zero Support group over the summer to make the case for an ambitious decarbonisation agenda during the Party leadership contest. He also briefly stood in for Claire O'Neill as Energy and Climate Minister in 2019, during which time he signed the UK's 2050 net zero target into law.

After Liz Truss moved into Downing Street earlier this month, her administration announced plans to hold a three-month review of the UK's net zero target, in a bid to explore how the goal can be met while also maximising growth, increasing energy security and "in a way that is affordable for consumers and businesses".

In his speech this morning, Skidmore emphasised the clear economic case for net zero, which he described as a "truly global phenomenon", noting that 90 per cent of the global economy is now covered by net zero targets, with the US, China and Europe pushing forward with their clean energy and decarbonisation plans in the wake of the global energy crisis.

"It's no longer a target, but an economic reality that is leading international markets and investors to make decisions on the future - indeed, on the future prosperity of all of us here in the UK," he said of net zero.

"If we get this right, net zero can unlock hundreds of billions of individual investments at the same time as presenting new green trade and export opportunities for the UK," Skidmore added. "But we have no time to waste."

The decision to hold yet another review has prompted frustration from some quarters of the green economy, amid the sense that the economic case for net zero has already repeatedly been stated - not least through the work of the Climate Change Committee (CCC) - and that the latest review therefore risks wasting precious time to get on with putting the Net Zero Strategy into action.

But, echoing the argument made by CCC CEO Chris Stark at the Net Zero Festival yesterday, Skidmore today argued that while the case for net zero was already clear, there was still work to do to fully convince the UK public, and that the Net Zero Review was an opportunity to turbocharge the decarbonisation agenda.

"We all know that taking action on climate change is overwhelmingly popular with the public," said Skidmore. "Polls consistently demonstrate that it is the third most important issue behind the economy and health care provision. Households, businesses, communities all want to play their part in achieving net zero, yet many still remain uncertain on how they can personally afford to change their boiler, to insulate their roofs ,or to switch to an electric car."

The Net Zero Review comes amid troubling times for the UK economy, with the value of the pound dropping following the Chancellor Kwasi Kwarteng's ‘Growth Plan' on Friday, and inflation, energy bills and living costs rising to challenging levels for millions of household and businesses.

But Skidmore insisted that his Review would be "truly independent" in its work and recommendations, and argued it was an "opportunity to restate the argument for why the energy transition can make our country and every person within it warmer and richer".

"It is your chance to demonstrate why net zero matters not merely for our environment, but for our economy and our future growth," he said.

Quizzed as to why there was a need to spend time further analysing the benefits of net zero, Skidmore argued that the geopolitics had shifted in the year since the government's Net Zero Strategy was published, due to soaring energy prices and Russia's war in Ukraine. Moreover, he stressed it would only be possible to push forward on the wholesale transition of the UK economy with the support of the public.

"I still feel we face populist challenges across the country on whether the energy transition is not only a cost, but somehow that the energy transition is responsible for rising energy bills," Skidmore said. "It is unfathomable that some people might believe that without recognising that solar panels in Europe actually save £29bn from the cost of gas, and that without renewables in our country we would be in a far, far worst place. That's the situation we have to face and we will continue to have to face. Net zero is not a goal, it's a journey, and on that journey we're going to have to continue  to reframe narratives to be able to maintain that support.

"We've got popular support for tackling climate change - overwhelmingly - but how do we ensure that translates into popular support for individual action on net zero? I'm very keen also that with the narrative framing of this report, I want the Review to be seen as a moment for net zero to be seen not just as a green project by some on the centre-right, or an environmental project, but that it is seen as they key economic instrument by which we deliver growth for the future."

Chris Skidmore: 'Net zero is no longer a target, but an economic reality'