Google is to fund a $650,000 (£390,000) research project with UK charity SolarAid to explore the extent to which efforts to distribute solar lights in Africa can help alleviate poverty.

Renewable energy companies have long maintained that solar lamps can significantly improve livelihoods in areas of Africa that are off-grid by eliminating the need for dangerous and polluting kerosene lamps, allowing businesses to stay open longer, and enabling school children to complete their homework safely at night.

But despite the growing market for solar lamps, there is currently no firm evidence to demonstrate the scale of these various benefits, according to Kat Harrison, who set up SolarAid's impact and research unit in 2012.

Now the charity has secured funding from Google to carry out a two-year research project to gather this crucial data that will shape the organisation's future strategy and help it lobby governments to support the roll out of the technology.

The study will be conducted by an independent external research partner appointed by SolarAid, which will aim to interview around 15,000 people across two to three counties in Kenya. The research will assess four different groups that will access and use the technology in different ways, in an attempt to ascertain how it can reach the widest number of users and have the biggest impact.

"The idea of the research isn't really to test the models of distribution but to ensure we can still pick up benefits no matter what a household's economic status is, because obviously the more money you have will impact on your decision to buy a light in the first place," explained Harrison.

"It's not about trying to find out if giving out free solar lights is better than selling them. SolarAid doesn't believe that at all, because we think it undermines the market, it's not sustainable, and it doesn't encourage market practices to come into play, which brings in competition, better quality and access. It's more around just answering that question of 'does a solar light make a difference?'"

As part of the programme researchers will measure whether those households with solar lights are saving money and what those savings are being spent on. They will also explore whether shopkeepers are able to boost their incomes by extending their opening hours after dark, and examine the impact on education and health.

An initial pilot will be launched this summer, followed by a wider study later in the year, which could track as many as 15,000 people.

Jacquelline Fuller, director of Google.org, said it hoped the research could prove to be a powerful tool against fighting poverty. "SolarAid has committed to rigorously assessing their programmes and openly sharing their findings - and not just the rosy ones - to make sure they're making a big impact in people's lives," she said. "We're excited to further support their mission."

This article is part of the BusinessGreen Solar Hub, hosted in association with Solar Aid.

Bring Me Sunshine! SolarAid is taking part in a UK government fund match scheme. Meaning all donations by UK residents will be doubled this winter.

It's time to talk about climate resilience

How manufacturing execs are taking energy efficiency imperative on board 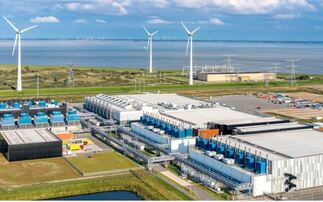 Selected organisations will receive $5m each in grant funding, as well as support from the tech giant's software products