It is not perfect, but the coalition's new package of carbon targets promises a tipping point for green businesses

Imperfect, incomplete, inconclusive, and yet genuinely historic; there are several justified criticisms that can be levelled at the government's new carbon budget.

We will have to wait to find out how carbon intensive industries will be supported, and the short- and medium-term policies which will ensure that the targets are met are sorely lacking.

There remains a small chance that the plan will be scaled back if the EU's climate strategy stalls, while the Cabinet-level row over whether to adopt the Committee on Climate Change's recommendations again confirms there are departments that remain unconvinced by the case for a low carbon economy.

And if the latest climate science is correct, the goal of halving emissions by 2025, while ambitious, is unlikely to be ambitious enough.

But this is not a time for gripes and complaints. Despite having to cope with the potential implosion of his career and taunts from the opposition benches over his alleged driving-related misdemeanours, Chris Huhne's announcement of the fourth carbon budget in the House of Commons yesterday marks a sizeable victory for him and the progressive green wing of the coalition government.

It is rare that government hyperbole is justified, but the targets and the accompanying strategy for achieving them are world-leading in their breadth and ambition. The UK is now locked into a rapid low carbon transition that will deliver an economy built on clean energy, electrified transport, and sustainable business models that are less exposed to the ravages of volatile fossil fuel prices and collapsing ecosystems.

What this means for the government is clear. As numerous commentators have pointed out over the past 24 hours, the coalition now has around 18 months to end the perennial uncertainty over energy and climate change policy, and mobilise a package of measures that drives unprecedented investment in renewable, nuclear and carbon capture and storage technologies, upgrades grid infrastructure, accelerates the rollout of electric vehicles and greener public transport options, and normalises more sustainable business models.

Moreover, if the right wing press gets its way (and for the sake of continuity if nothing else let's hope it doesn't) it may have to do all this with a new Energy and Climate Change Secretary at the helm.

Meanwhile, the implications of the new targets for businesses should be equally clear cut, and yet they remain strangely opaque within many organisations.

The adoption of the carbon budget provides yet further confirmation of what green businesses have understood for several years: the UK economy will change substantially over the next few decades throwing up countless new risks and opportunities.

As a result of the new targets and resulting policies, energy prices will continue to rise, environmental regulations will get ever tighter, rafts of new incentives will emerge, and entirely new markets and technologies will be established.

Astute companies are already aware of this and are planning accordingly. They are developing new products and services and attempting to mitigate associated risks, constantly aware that game-changing new market opportunities are on the horizon or already emerging.

And yet many businesses are choosing to ignore this new reality, either unaware of the scale of the changes and the opportunities and risks they present or, like the heavy manufacturers that are thought to be behind Vince Cable's bizarre opposition to the carbon budget, choosing to try to hold back the tide presented by the low carbon economic trend.

This is in many ways understandable. At last night's BusinessGreen lecture evening in Manchester, the panel discussed how the failure of many businesses to take action to manage climate change risks is primarily a result of corporate horizons that rarely stretch beyond the next week, the next quarter, or the next year. Planning for something that is going to happen in five, 10 or 15 years' time is simply not part of the DNA of many businesses.

In addition, there is a constant danger that green politicians, media and businesses are preaching to the choir. Green business leaders instinctively understand the importance of the new carbon budgets, but many other businesses remain only vaguely aware of what has happened.

A quick glance at the front page of the papers this morning reveals that the FT is more interested in the alleged sexual proclivities of the head of the IMF than it is in a fundamental re-engineering of the British economy, while The Telegraph mentioned that Huhne addressed the Commons yesterday about climate change, but only to report that his alleged speeding ticket woes are worsening.

The onus now rests on environmentally conscious executives in all organisations to do their utmost to promote the historic significance of the government's commitment to the low carbon economy and convince those in the boardroom that the company must adapt to this new reality.

A tipping point is fast approaching, probably some point between 2013 and 2015, when the low carbon policy framework will finally be in place and attention will shift from planning to building. Building the offshore wind farms, electric cars, grid infrastructure, marine energy parks, carbon capture and storage plants, nuclear reactors, and green business models that will constitute the new low carbon economy.

Those who fail to heed the historic lesson presented by the new carbon targets risk not only missing out on billions of pounds of commercial opportunities, but more importantly they risk being left behind as competitors exploit the rewards offered by the transition to a greener economy.

Nuclear inspector accused of complacency after reactors get all-clear 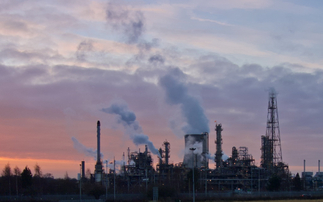