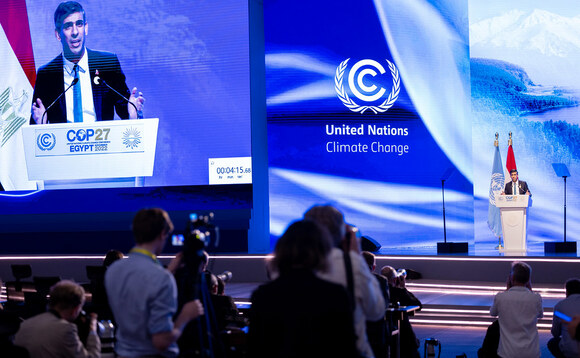 This blog post starts with a pretty major caveat. BusinessGreen's Michael Holder and Cecilia Keating are on the ground in Sharm El-Sheikh this week reporting on the crucial developments from the UN talks, but I am not physically at this year's COP. As such, the observations that follow are very much formed from afar. The impressions  of those in the room where it happens may well be very different.

That said, judging by some of the noises coming out of COP27 this week I am not alone in being decidedly underwhelmed thus far. It feels like an important opportunity is being squandered.

This frustration comes not from the failure to land an historic new climate accord or deliver the billions of dollars of climate finance that is owed. Engineering a major breakthrough at COP27 always felt like a near impossible big diplomatic ask, given the backdrop of intense geopolitical tensions and worsening economic headwinds. As US Climate Envoy John Kerry made bluntly clear last week, proposals for anything that can be characterised as climate compensation is never going to fly. No matter how unjust and short-sighted their intransigence may be, industrialised nations are not going to stump up billions of dollars of new climate funding, few governments with fossil fuel reserves are going to voluntarily keep them in the ground at a time when oil and gas prices are soaring, and whether it's looming invasion or looming recession, everyone has severe near term distractions to contend with.

And yet it feels as if governments are wilfully failing to exploit some of the relatively easy wins that could have delivered significant progress at this Summit.

Take last week's report from Climate Action Tracker detailing how projections for warming this century based on government's national climate action plans have not advanced even a fraction of a degree in the past 12 months. We are still on track for a disastrous 2.4C of warming based on the targets governments have in place for 2030, and that assumes they are met. Based on current actions we are on track for more like 2.7C of warming. Catastrophic carbon sink tipping points loom.

This analysis implies that next to no progress has been made in the past year, but as a separate study from the Energy and Climate Intelligence Unit yesterday made clear, that is not quite true.

Thanks to a combination of still plummeting clean tech costs in China and India, the passage of President Biden's climate bill, and the EU's significant strengthening of its clean energy plans in response to Russia's invasion of Ukraine the world's four most strategically important markets are arguably ahead of schedule with the decarbonisation efforts set out in the Nationally Determined Contributions (NDCs) they have submitted to the UN. To take just two examples, China is on track to install 25 per cent more renewables and double its electric car sales this year, while deployment of wind and solar in the US suggests the country could generate 85 per cent of power from renewables by the end of the decade. Those recent IEA reports predicting global emissions are very close to peaking look more plausible by the month.

As former UN envoy Rachel Kyte observed: "Between Putin's energy supply shock and the irresistible case for renewable energy, major powers could outstrip their NDC. Out of every crisis comes an opportunity. This is one we cannot fail to grasp."

And yet, in failing to even countenance strengthening their NDCs the economic superpowers risk doing precisely that. Meanwhile, smaller nations are making precisely the same mistake - failing to respond to the rapid changes in global energy markets to update their national climate action plans and embrace the obvious and cost effective clean tech deployments that are increasingly available.

The underplaying of both real world and potential progress towards net zero acts as a drag on the wider climate negotiations, starving them of the momentum a greater sense of progress would bring. If the Summit had started with governments recalibrating NDCs to properly reflect the policy and technological changes seen over the past year and making more of the various industry-led initiatives to tackle emissions from carbon intensive sectors and accelerate the clean energy revolution, then it would now be in a stronger position to push back against cynical attempts to dilute the totemic 1.5C warming target.

Delivering progress on climate finance is obviously a bigger challenge still, but again it feels like governments are failing to maximise the progress that could be made.

This will sound naive, but it is hard to believe a form of words can't be found that delivers increasing levels of funding to address the very real climate-related loss and damage the world's most vulnerable countries are facing without industrialised nations accepting liability for those losses. If divorce lawyers can do it, the world's best diplomats really should be able to find a way, especially when it is in everyone's best interests for an agreement to be reached. As BusinessGreen's editor, Michael Holder pointed out this morning, the Paris Agreement already states "that Article 8 of the Agreement does not involve or provide a basis for any liability or compensation".

Similarly, if a major uptick in climate funding from Treasuries is a non-starter, why is there not more momentum behind the kind of eminently practical climate finance reforms being proposed by the likes of Barbados' Mia Mottley? Relatively simple reforms to the IMF and multilateral development banks could have an outsized impact on flows of climate finance globally, but few governments are taking up the cause with sufficient vigour.

More radically, it remains bizarre that exchequers are scratching around for ever more labyrinthine ways to mobilise climate finance flows without hitting domestic taxpayers when the record profits of the fossil fuel industry are just sitting there. Windfall profits have now reached such a high that even some oil and gas executives are publicly accepting windfall taxes are inevitable and justified. If every government taxed fossil fuel firms at the rate imposed by Norway, a country famed for its economic success and stability, then a sizeable chunk of the climate finance gap could disappear overnight. The polluter pays maxim has never felt more apt.

It is an unhelpful cliche to declare that all that is needed is political will. But all that is needed is ppolitical will. COP27 is providing worrying echoes of climate politics at the national level, the UK very much included: obvious, cost effective, and popular policies sit on the shelf as governments' soft pedal on the climate action they insist they are committed to, and all because of a combination of political inertia and the fear of upsetting vocal vested interests.

Decarbonising the global economy inside three decades is an epic challenge defined by technological barriers, stranded assets, and numerous wicked problems. But it becomes a whole lot harder still if governments won't take the easy wins in front of them, many of which are much in evidence at COP27 this week. They could start by telling people about the good things they are already doing and doing the good things they have already said they will do.