If the government wants Heathrow expansion, why hasn't an aviation climate strategy been cleared for take-off?

It should be the Jumbo Jet in the Cabinet Room. As the Cabinet today discusses whether to give the go-ahead for the expansion of Heathrow, the climate change implications of a new runway ought to be the dominant item on the agenda. And yet if mainstream media coverage and political commentary is any guide, it will barely get a look in.

Political considerations will, of course, be given an airing, as Theresa May mulls the intense criticism and highly-charged by-election that will be triggered if she gives the project the green light.

That is why it is more than a little disquieting that a non-peer reviewed report on future air pollution at Heathrow drawing on heroically optimistic assumptions about future adoption of zero emission transport technologies could lead the BBC News under the banner headline 'Heathrow runway 'within EU pollution laws''. It is also why today's latest round in the legal battle between ClientEarth and the government over UK breaches of EU air quality rules will be causing sweated brows at Heathrow as well as in Defra. May could yet approve Heathrow and still find the project locked in years of completely legitimate legal rows over its impact on local air quality.

However, with the government adamant if Heathrow does not go ahead Gatwick will there appears to be zero appetite for a serious discussion about what new runways mean for the UK's climate change efforts.

From the narrowest political perspective there are actually good reasons for this staggering omission.

Howard Davies initial report on airport expansion argued a new runway could be made compatible with the UK's climate change goals, giving the government the political cover it needed to swat the climate issue aside. However, what the government has thus far refused to engage with is the fact the aspirational target to keep UK aviation emissions at 2005 levels in 2050 is both arbitrary and too weak, and even then the Davies report made clear meeting it requires heroically ambitious assumptions on future carbon pricing and clean tech adoption.

The final report adopted a similar line, with Davies arguing a new runway is manageable within the UK's climate change commitments "if the rest of the economy decarbonises as people expect and aircraft become more fuel efficient".

This pro-expansion argument was then given a further boost last month when the UN's ICAO finally agreed an international carbon offset deal, which will impose an emissions price on flights in and out of the UK's new runway and is underpinned by the industry's commitment to ensure emissions flatline from 2020. "Look," Ministers will be able to say. "It all adds up. The additional flights will be offset and there is room in our carbon budgets for a more aviation emissions through to 2050."

The flaws in this argument are remarkably obvious, if only the government had the nerve to push back against the optimistic analysis it so desperately wanted to receive.

Firstly, as Davies in fairness makes plain, expansion at Heathrow makes further runways at other airports all but impossible. A Campaign for Better Transport report this summer pointed out how the Davies Report's assumptions include extremely high carbon prices - an extra £68 on a flight from London to New York, for example - that would serve to actually restrict flight numbers from regional airports. One government minister told the BBC this week they would like to see new runways at both Heathrow and Gatwick - they are either unaware of or don't care about the climate change implications. In reality, expansion at Heathrow could necessitate contraction at other airports if carbon budgets are to be met.

Secondly, even supporters of the UN deal to offset aviation emissions admit in its current form it is too weak and will be phased in too slowly. It is not yet compatible with the Paris Agreement's 2C goal and is based on optimistic assumptions about the integrity of offsets and the pace of clean tech development.

Thirdly, and most importantly, Davies suggestion Heathrow expansion is compatible with the UK's climate commitments if wider decarbonisation proceeds as planned and low emission aviation technology materialises is self-evidently based on a massive 'if'.

Currently the UK is not on track to deliver the decarbonisation of the wider economy as planned. We all await the promised emission reduction plan with huge anticipation and the government insists it will meet the targets set out in the Climate Change Act, even if it has just been confirmed the crucial plan could be delayed until next February. But expansion of Heathrow makes delivery of the UK's currently faltering decarbonisation efforts even more challenging - large swathes of the economy will have to become virtually zero emission just to give aviation more headroom. The basic principle of climate action should be to try and pull risk out of the system; new runways simply load more risk in.

Moreover, even if the decarbonisation of the economy proceeds smoothly from this point on (spoiler alert: it won't) UK aviation could still blow its carbon budget if hugely ambitious improvements in fuel efficiency and low carbon technology are not delivered as envisaged. The government's long term climate strategy once again rests on a hit and hope approach to new technology development that is not backed by a sufficiently robust plan for ensuring these promising innovations emerge.

The parallels with the fracking debate are marked. There is arguably an environmentally credible route forward for fracking in the UK based on more robust regulations and inspection regimes, the large scale development of carbon capture and storage (CCS) technology, and a viable plan for delivering greener heating technologies. Instead, the government has sought to steamroller opposition to fracking while singularly failing to deliver the safeguards and long term strategy that could potentially make it viable.

Exactly the same thing is happening with aviation expansion. An environmentally credible pathway has been sketched out, but where is the huge R&D effort and firm policy measures to address completely understandable concerns this pathway will not be followed? Aviation industry progress on biofuels has been reasonably impressive over the past decade, but the UK's first jet biofuel project was shelved earlier this year and research efforts on the scale that is required remain patchy at best. A co-ordinated transport and carbon pricing policy to bring an end to short haul flights remains a pipe dream.

Aviation remains the area of climate policy where the gap between the politically palatable and the politically necessary is at its widest. Governments can make the case for clean energy based on long term cost and health benefits, they can make the case for electric cars that tackle air pollution, and insulation that makes our homes warmer. It is a whole lot harder to make the case for huge surcharges on your summer holiday, even before you consider the difficulty of convincing emerging economies to curb their aviation growth. There simply has to be a technical solution, and yet government efforts to engineer the necessary technical progress remain sparse to the point of virtual non-existence.

This is why the failure to properly debate the climate implications of airport expansion by both the government and the media is so concerning. Any serious engagement with the topic would have concluded a new runway is an extremely risky proposition that is hard to justify. If Ministers had then still concluded short and medium term economic concerns outweigh the climate costs, then they would have also had to acknowledge the only way to mitigate the resulting risks would be through a concerted and coherent strategy for delivering promised clean tech improvements. It would still be a pretty reckless approach given the scale and pace of the climate crisis, but it would improve the chances of low carbon aviation one day becoming a reality while retaining the sense Number 10 regards climate action as a genuine priority.

Such a move would have been dismissed by green groups as a fig leaf, but sometimes fig leaves are important - without them you are naked. 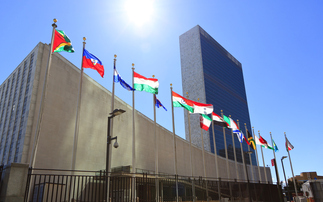 All the top green business news from around the world this week, including fresh WHO air pollution guidelines and global coal, methane and HFC commitments

Renewable energy, zero waste and conservation are among projects set to secure funding through the retail giant's green bond,