The Hinkley negotiations have gone into injury time, and whatever the outcome the government will end up on the losing side

The UK government's energy strategy is experiencing what the man who made Manchester United the dominant force in European football - kids, ask your parents - once called "squeaky bum time". Injury time has been extended again and again, but the point at which the whistle blows and EDF will be finally forced to make a decision on whether to build the Hinkley Point C nuclear project is looming. The future of the shaky edifice that is the UK's current decarbonisation could yet rest on the result.

Officially, the position remains the same as it has been ever since it was confirmed in October that China General Nuclear Power Corporation would take a stake in the project and stump up a third of the costs. EDF has said it will make a final investment decision once it has secured "finalisation of long form documentation based on Head of Terms agreed today; finalisation by EDF of its financing plan; approval by the boards of EDF and CGN; [and] clearance by merger control and other governmental authorities in China and Europe". All the recent speculation the project is in trouble is just that, speculation - or so the official line goes.

In reality, the conflicting signals surrounding the project confirm it is anything but a happy ship. EDF may have told contractors on the project to get to work, fuelling hopes a positive decision will come this month. But the public opposition from EDF unions, the departure of Hinkley Point's project director, and the reports of further delays to a decision that has now been delayed more often than a train out of London Bridge, paint a very different picture.

As the Guardian's Nils Pratley observed last week, the likelihood remains the deal will go ahead. The government's energy strategy is hugely dependent on the project going ahead and the loss of face that would result from scrapping it at this late stage would be so all-encompassing that Ministers and executives will strain every sinew to get a positive result. Do not be surprised if the Treasury greases the wheels of the deal still further to secure something it can call a victory.

However, it would take a brave man or woman to put money on the project a) getting a final investment decision and then b) getting built on time and on budget. You would get long odds on that little accumulator, but I'd still advise you to keep your money in your pocket.

What is clear is the government has so badly mishandled both the long-running Hinkley Point negotiations and its wider clean energy reforms that it will end up on the losing side whatever the result. By the end of this month the government will either be undertaking a frenzied re-think of its energy strategy in a desperate attempt to plug a Hinkley-sized gap in the UK's post 2020 clean power supplies or unconvincingly attempting to spin paying over the odds for a new nuclear project as a good piece of business for British billpayers.

As any half decent diplomat will tell you the key to a successful negotiation is having some sort of leverage. The government never had much leverage in the Hinkley deal, so fulsome were successive ministers in their insistence the project was essential to the future of the UK's energy mix. But until the current government torched the previous coalition's energy strategy, taking CCS, onshore wind farms, and widespread efficiency upgrades down with it, there remained the sketched outline of Plan B, a semi-credible route for meeting the UK's emissions targets should the Hinkley deal go south.

The government's chronic short termism has left Plan B in tatters and it is now very difficult to envisage how the UK can meet its medium term legally binding emissions targets without either Hinkley Point or a screeching U-turn on renewable energy, CCS, and energy efficiency policy. Many environmentalists will be hoping for the latter, but it does not take a political anorak to recognise that in the event of EDF walking away from the project the government would face intense pressure from its backbenchers to immediately dilute emissions targets for the 2020s, double down on new gas plants to fill the worsening energy gap, and hope small modular nuclear reactors one day prove more attractive than their big cousins.

EDF knows all this and will be using the government's paucity of credible low carbon options to its advantage as it seeks to secure the final assurances that allow it to go ahead with the project. The company's negotiating hand strengthened significantly on the day last November the government axed its CCS project and cut energy efficiency funding.

As I've argued previously, the last government's clean energy strategy centred on a series of subsidised proof of concept projects for the big three low carbon options - renewables, nuclear, and CCS - followed by intense cost competition between the different technologies through the 2020s in order to deliver the optimal mix. There were inevitable teething issues in the execution of this strategy. The government overpaid for the first wave of large renewables projects; agreed an overly generous deal for Hinkley Point, again because of a lack of competition; failed to move fast enough on CCS; and mismanaged the accompanying capacity market to such an extent that energy saving has been sidelined and dirty diesel generators rewarded. But the over-arching strategy was a good one and, as the last round of clean energy support contract auctions proved, intense competition does bring down the cost of low carbon power.

The tragedy of the government's energy policy blitz - over and above the lost jobs, increased emissions, and investment foregone - is the manner in which the party of business and competition has prematurely narrowed the energy playing field, easing the competitive pressure on the nuclear and unabated gas industries in a way that jeopardises UK energy security and will only push up the long term cost of decarbonisation.

With CCS and onshore wind out the picture, the energy storage market still embryonic, and the government showing zero appetite for a comprehensive energy efficiency programme, the UK's medium term decarbonisation strategy appears to rest on ministers' willingness to make an already generous nuclear deal even more attractive to a company that is having a visible wobble about its appetite for the project. And all without any semblance of the Plan B that would both strengthen its negotiating hand and ultimately reduce the cost of meeting the UK's carbon targets and energy security goals. To paraphrase Sir Alex Ferguson once again, "energy politics, bloody hell". 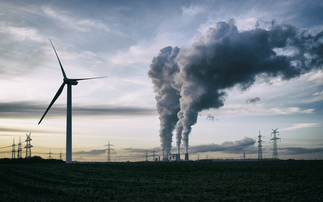