Where's a Green Investment Bank when you need one?

There were plenty of reasons for yesterday's Budget to leave green businesses feeling pretty conflicted. The high stakes gamble on the future of UK renewables investment, the absence of any new thinking on energy or resource efficiency, the glaring contradiction between Philip Hammond's pledge to tackle air pollution and his bragging about excluding vans and trucks from even modest new measures. The action on electric vehicles and ocean plastics may have been hugely welcome, but after looking at the small print it easy to see why green groups are frustrated at the failure to build on the promise of the government's recent Clean Growth Strategy.

However, there was another frustrating aspect of Hammond's Budget and it is one that is easy to overlook because it relates to a battle that was done, dusted, and sadly lost earlier this year.

Flicking through the Budget documents and discovering that the Chancellor's promised £400m of funding for electric vehicle charging infrastructure is in fact £200m of government funding and £200m to be leveraged from the private sector, I was left thinking: "wouldn't it be useful if you had some kind of dedicated financial institution with expertise in investing public funds in emerging green technologies and leveraging in private capital? Perhaps you could call it a Green Investment Bank and you could use it to not only direct capital to this strategically important, but still fledgling, infrastructure, but also to generate a return for the Treasury."

The Budget represented the first major test of the government's short-sighted decision to privatise the Green Investment Bank (GIB), and it is fair to say that decision was once again found wanting.

EV charging infrastructure is perhaps the best example of where the GIB would have been helpful, because it is here where government funding is good to go, there is a need to select the best partners, and a valuable co-ordinating role for someone to play in ensuring charge points are well located and widely compatible. These are all things a dedicated arms-length state-owned bank could arguably do better than Whitehall. Moreover, a strategic bank could integrate such investments with the government's wider clean air plans. And it could arguably do all this without distorting the market, because it seems the kind of patient but affordable capital needed to build a charging network at pace and scale is not yet that easy to come by.

However, it is not just with EV charging where the GIB would have come in handy. The Budget's controversial plans for renewable energy and its non-existent plans for energy efficiency could also have benefitted from access to a state-owned bank.

The decision to freeze both the carbon price floor and the levy-funding for clean power auctions rest on the premise renewables costs will keep falling. The UK's carbon and renewables targets now depend on the ability of offshore wind developers to keep driving costs down and other renewables developers finding a way to deliver power with contracts that are essentially subsidy free (something, by the way, the Treasury presumably doesn't think will  happen given its official central projections show next to no new capacity across numerous technologies).

A state-owned bank capable of investing in relatively higher risk emerging technologies and project approaches could have played a major role in helping to drive costs down, while pooling risk, attracting private partners, and delivering financial innovation.

Exactly the same thinking could have applied to the energy and resource efficiency sector, where it is fair to say the market has failed to scale on its own. Campaigners have pointed this out ad nauseum, but Germany's equivalent of the Green Deal loan scheme has proven successful because the state bank provided loans at ultra-low interest rates in pursuit of a national strategic goal. Some critics have argued such an approach is not possible under EU State Aid rules, although it is perhaps worth noting that Germany is, the last time I checked, an EU member state.

None of this is meant as criticism of the GIB's new owners Macquarie Group, who after rebranding the entity as the Green Investment Group have got off to a pretty good start, mobilising investment, aiming at overseas expansion, and generally talking a good game. It remains to be seen if the firm will continue to invest in earlier stage technologies where others may fear to tread. But who knows, it could end up being one of those private investors stumping up part of the £200mfor new EV charging infrastructure alongside the government.

However, it is easy to see how access to a state-owned GIB would have significantly strengthened the green credentials of a Budget that could yet spell bad news for clean energy infrastructure.

Of course, the government's response to all this would be that it simply had to set the GIB free. That arcane State Aid and accounting rules meant that even if the government retained only a small stake the bank could not borrow without adding to the deficit. A privately owned GIG will have more flexibility to support emerging low carbon infrastructure and more postive impact in the long run, Ministers say.

To which the counter response would be, is that the deficit you said would be wiped out by 2015 and is now not expected to be gone until 2025 if we are extremely lucky? Have you not just published a budget that predicts sub two per cent growth for every single one of the next five years? Have you not just published a Clean Growth Strategy that requires billions of pounds of strategic investment? For how long does your austerity economics have to fail - even on its own terms - before you consider an alternative approach?

Any complaints that such GIB borrowing would be asking our children to pay off our debts could be swiftly answered by the fact our children would also benefit from the resulting long term clean infrastructure, not to mention the reduced emissions that will hopefully mean they do not end up having to contend with a collapsing biosphere. The GIB offered the opportunity to borrow at ultra-low rates and put that capital to good use building the clean, competitive, technology-enabled economy of the future that Hammond said he wants to see. The chancellor really could have done with the GIB yesterday. Sadly, it was nowhere to be seen, and he only had himself to blame.

Is the world finally at a clean energy tipping point? 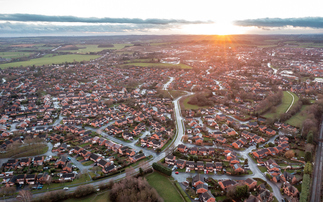