Ann Widdecombe, Godwin's Law, and why the Climate Change Rebels were wrong

The race for the most confusing climate sceptic article of 2014 is a crowded field, but as the nights draw in a new front-runner has emerged with former Conservative MP Ann Widdecombe's latest effort in the Daily Express. It really does have everything: allusions to Nazis, dismissal of scientific inquiry, misinterpretation of policies.

Challenging the myths perpetuated by climate sceptics is an onerous task and given the extent to which these arguments are marginalised in boardrooms and government departments around the world it is rarely worth the effort. However, in recent weeks it has been clear a concerted campaign is under way to try and make the repeal of the Climate Change Act an issue at the next election, putting billions of pounds of much-needed investment and the UK's international credibility at risk, not to mention hopes of building a greener, cleaner, healthier and more prosperous economy.

Widdecombe's article is, to date, the nadir of this campaign in so much as it crams virtually every climate sceptic canard going into 330 words and ties them all together with a storm of contentious opinion presented as fact, or "holy writ" as the former Conservative MP might put it.

There are quasi-legitimate arguments against the Climate Change Act. You could credibly argue targets are not the best way of driving decarbonisation, you could even just about argue that we would be better off crossing our fingers and hoping for the best when it comes to climate risk, although you need a pretty reckless assessment of said risks to do so.

Widdecombe does none of these things. So, in the grand tradition of journalistic rows, what follows is a Fisking of the myths, omissions, and spin that defines the ex-Strictly contestant's attack on the Climate Change Act.

"Six years ago Parliament passed the Climate Change Act with a mere five MPs, all Conservatives, voting against it."

Widdecombe starts on firm ground. The Climate Change Act did indeed pass with an overwhelming majority. This means that either almost every Member of Parliament has been hoodwinked and voted against the UK's interests, as Widdecombe and her allies suggest, or our parliamentarians considered the evidence and thought this was a good bill.

"This week I returned to the House of Commons to join the other four for an anniversary dinner. Andrew Tyrie, Peter Lilley, Christopher Chope and Philip Davies are still there fighting the nonsense but I have simply joined the ranks of the long-suffering British public who view the increasing 'lights will go out' stories with grim foreboding."

And you thought it was the "Green Blob" that enjoyed cosy Westminster dinners to reflect on their successes. As to the reasons for the British public's "long suffering", I'd hazard that if you asked them they would list numerous iniquities before they settled on climate change policy. They may well be fearful the lights will go out, but this is most likely because newspapers like the Daily Express keep telling them we face blackouts, even when the people who actually operate the grid tell us we don't.

"Support for the then Labour Government's bill was all part of Cameron's campaign to 'modernise' the Tory Party. It was the same campaign which saw him driving huskies and putting a ridiculous wind turbine on his roof so he was pretty displeased with the five of us but we were right. Oh, so right."

In fairness, Cameron's rooftop wind turbine was "ridiculous" and no doubt he was furious with the Climate Change Rebels, just as he is now furious with those MPs who have given up on even the vaguest pretence of party loyalty in favour of ideologically obsessive campaigns to destabilise their own government. Widdecombe is perfectly entitled to suggest she was "right" about the Climate Change Act, but if she is going to do so it may be worth offering some tangible evidence.

"The wretched Bill committed us, at huge expense, to reduce the UK's carbon emissions by a staggering 80 per cent."

It is true that the Act commits to greenhouse gas emissions of 80 per cent, but Widdecombe is guilty of an important omission. The goal is to cut emissions 80 per cent against 1990 levels by 2050. We have nearly half a century to reach the target and we have already achieved around a quarter of the goal. It is daunting, but it is not as daunting as Widdecombe implies. It is also contestable that the commitment comes "at huge expense". Clean energy costs are falling fast, while the Stern Review and numerous other studies have shown it is more cost effective to tackle climate change risks now than cling to business-as-usual. Finally, the Act provides freedom for governments to respond to economic pressures and ensure decarbonisation is delivered in a way that does not load excessive expense on the economy.

"Yet that was supposed to be part of a global agreement and, as was easily foreseeable, there has been no such agreement but we have soldiered on despite accounting for about two per cent of all the world's emissions."

There have, in fact, been global agreements in which nations have pledged to keep post-industrial temperature increases to 2C and work is continuing on a legally-binding treaty to be signed by 2020. Moreover, over 60 nations now have some form of binding climate change legislation and several economies - Denmark, Mexico, California - have Climate Change Acts similar to the UK. And the EU has just agreed to binding emissions targets through to 2030 that are pretty much in line with the emissions reduction trajectory required by the Climate Change Act.

Yes, the UK does account for two per cent of global emissions, but two per cent is still a hefty chunk for such a small country (it is about the same as the emissions from the entire global aviation industry) and our carbon footprint is higher still when you consider our historical responsibilities and the structure of our import-dependent economy. It is also worth considering we once accounted for a fraction of global trade before the industrial revolution made us a superpower. Being a small part of a big problem is not an excuse for not trying to tackle it. In fact, small nations can trigger economic transformations that the entire world emulates.

"We have shunned the obvious answer of nuclear power in favour of vast, ugly, inefficient, bird-mashing wind farms which benefit none but those who take the subsidies from them."

There is so much wrong with this it is hard to know where to start. The idea the UK has "shunned" nuclear power is just bizarre when the government is planning to approve a heavily subsidised new nuclear power plant for the first time in a generation. In reality, the Climate Change Act and the need to decarbonise our power supplies is one of the main reason why all three main parties are backing plans for a new fleet of reactors. Nuclear development may have taken longer than its advocates hoped, but it has not been "shunned" in any sense of the word - just look at the number of meetings between Ministers and EDF. And wind has not been favoured over nuclear; the past two governments have made it painfully clear they want both.

Wind turbines certainly are "vast", as Widdecome alleges, but beauty is in the eye of the beholder; traffic and cats "mash" more birds than turbines ever will; turbines' efficiency ratings match up pretty well with other energy sources; and if wind energy generators benefit through subsidies, the people who have to breathe less fossil fuel-related air pollution benefit too, as does the country as a whole from enhanced energy security and increased inward investment.

"The phrase 'political correctness gone mad' could have been invented for this stupidity alone."

Personally, I have no idea what "political correctness" even means anymore. But if you take it as a desire to avoid language, policies, and behaviours that needlessly cause offence, especially to those seen to be at a disadvantage, then I cannot even begin to understand what it has to do with the Climate Change Act.

"Meanwhile the science of climate change is robustly disputed where once it was regarded as having all the authority of Holy Writ."

Science has never been regarded as "having all the authority of Holy Writ". Science and religion are very different things, not least because one admits its fallibility and adjusts to the evidence before it. "Robustly disputed" is a relative term, but to date these robust disputes have proven so effective that every single national science academy in the world has continued to warn that climate change presents a serious threat.

"So much was this the case that Nigel Lawson, whose book An Appeal To Reason is still the best refutation of the doom mongers, found it difficult to get published."

Yes, perhaps, but he did get it published in the end, and has spent much of the past five years taking to the pages of newspapers and the airwaves of the BBC to promote its arguments.

"In 1930s Germany they burned books that challenged state orthodoxy: here we just try to bury them."

"I am proud to have been one of those five MPs and I wonder how many others would join us if the vote were happening now."

Widdecombe finishes as she began, on firm ground, which comes as surprise given the intervening paragraphs. The question of how many Conservative MPs would join the five rebels if the Climate Change Act were voted on again is one of the current great unknowns of British politics. The hope is that when push comes to shove the vast majority of MPs would consider the scientific warnings and economic opportunities that underpin the legislation, recognise that decarbonisation is both essential and desirable, and acknowledge that an over-arching Climate Change Act helps deliver a greener and better economy (precisely as they did when the vast majority of MPs voted for the recent Energy Act and its over-riding focus on delivering clean power).

But, as Widdecombe implies, the Tea Party-fication of parts of the British Conservative Party means the campaign to vilify the Climate Change Act is not done yet. There are a number of Tory MPs who are now working hard to undermine the legislation and the UK's wider green economic programme at every turn. Although, in fairness, the many businesses that support decarbonisation can take comfort from the fact that if the best arguments they can muster boil down to comparing the "green blob" with Nazis the Climate Change Act is not in any danger just yet.

Between two worlds: People making progress in the middle ground

Mind the gap: Why ESG reporting at private companies is essential for achieving net zero

Five surprise technologies that can turbocharge the net zero transition 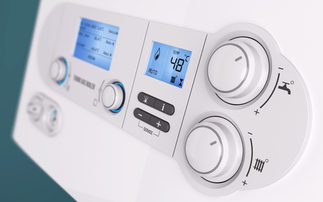 All subsidies for heating systems that undermine the UK’s climate goals must come to an end, analysts warn 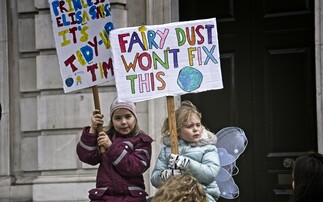 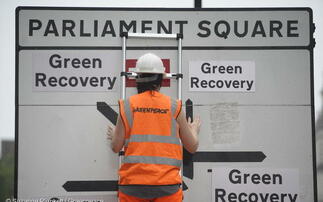 The CBI, the TUC, and Green Alliance are all issuing much the same message: the government has just weeks left to deliver a genuinely credible net zero plan