Feed-in tariffs must be cut, but solar farms are right to feel aggrieved

You can't say we weren't warned. After several months of carefully co-ordinated statements suggesting ministers were unhappy with the generous level of support the feed-in tariff scheme offers large solar parks, the government today confirmed it will undertake an early review of the scheme with a view to scaling back incentives available to large solar developers.

The bulk of the microgeneration industry is understandably delighted and relieved that large solar farms will now almost certainly be blocked from hoovering up the bulk of the £360m in feed-in tariff incentives that are available up to 2014. The timetable for the review also increases investment certainty for providers of small-scale wind turbines, rooftop solar panels and other technologies, providing them with assurances that tariffs are highly unlikely to change before April 2012.

Developers of anaerobic digestion technologies will be even more delighted than most, after the government confirmed it will undertake a fast-track review of the support available to the technology with the goal of increasing incentives as soon as possible.

However, there is a notable absentee from this welcoming committee in the form of solar farm developers and investors, many of whom will feel understandably aggrieved at the imminent cut in support.

The government has handled the announcement pretty well, making it clear over the course of several months that changes were coming, eloquently arguing that the success of solar farms would slow the rollout of the domestic, business and community installations that will serve to raise the profile of renewable energy generation, and acting early to avoid kneejerk cuts to support at a later date.

However, climate minister Greg Barker is guilty of rewriting history when he says the feed-in tariff was never intended to support solar farms. If that was the case, why did the original scheme offer incentives to solar PV installations capable of producing up to 5MW of power? The government may have been surprised by the scale of interest in larger solar farm installations, but the scheme was clearly structured to provide support for such developments. Investors and developers have every right to feel frustrated that they have drawn up plans based on incentives they believed would be in place until at least 2012, only to see them changed earlier than anticipated.

In fairness, Barker is right to say the main goal of the feed-in tariff should be to accelerate the rate at which highly visible on-site renewable energy installations such as small-scale wind turbines and rooftop solar panels are installed. Such projects will not only help to create jobs – they will also serve to normalise the use of clean energy for a new generation of business leaders and homeowners.

But this is not the sole aim of feed-in tariffs. They are also intended to increase the proportion of energy the UK generates from renewable energy sources and provide manufacturers with the economies of scale they need to reduce the cost of technologies such as solar panels. Measured against these two goals, solar farms perform as well as, if not better than, smaller-scale rooftop installations.

Moreover, the decision to review tariffs for any solar installation with a capacity over 50kW risks impacting larger solar rooftop installations proposed by businesses and community groups. As the Renewable Energy Association has pointed out, if the government wants to cut incentives for ground-mounted solar farms, it should limit the review to those facilities, rather than undertake a review that could stop businesses, schools, hospitals and housing associations from deploying solar panels.

On balance, the government is right to act sooner rather than later to change solar tariffs, even if it has set the definition of a large installation too low. The feed-in tariff budget is limited and ultimately the risk of over-spending presented by large solar parks is too great to be tolerated.

However, if the government is serious about reducing the cost of solar technology and delivering a balanced mix of energy sources, then it should now be investigating how to ensure that the work put into planning new solar farms does not go to waste.

Speaking to BusinessGreen, Barker hinted support for clean energy delivered through the government's proposed electricity market reforms could benefit solar farm developers. But if the coalition wants to avoid the charge of abandoning a sector that has the potential to bolster the UK's renewable output, then it must find an alternative means of supporting solar developers before it leaves them high and dry. VIDEO: CEO of solar-powered lamp charity joins James Murray for a chat ahead of the upcoming BusinessGreen Leaders Awards 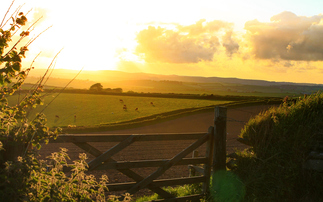