Just days after the government promised a more coherent energy and climate strategy, the Chancellor has thrown decarbonisation plans back into disarray

Sometimes, when politicians claim the media are overly cynical and argue public disillusionment with politics undermines the democratic process I find myself nodding in agreement. And then days like yesterday come along and remind you quite how disingenuous, short sighted, and narrowly expedient our political class is capable of being.

You will have to make your own decision as to which aspect of the government's shock decision to scrap its £1bn carbon capture and storage (CCS) demonstration project is the most dispiriting.

Perhaps it's the timing. The announcement was made on the same afternoon as the Chancellor's Spending Review, guaranteeing that this betrayal of a manifesto pledge would secure scant mainstream media attention.

Perhaps it's that manifesto u-turn itself. Just six months after the Conservative Party praised itself for "committing £1 billion for carbon capture and storage", the Conservative government has ditched the flagship project with zero warning and even less in the way of credible explanation.

Perhaps it's the faltering attempt of an explanation offered last night by Greg Hands. The Chief Secretary to the Treasury argued on Channel 4 News the promised £1bn for CCS manifesto pledge was actually subject to 'value for money' considerations, which begs the questions as to how an apparent cost-to-benefit analysis was applied, why cost concerns were not raised far earlier in this five year-long process, and how CCS apparently offers worse value for money than the R&D funding for small nuclear reactors the Chancellor announced yesterday?

Perhaps it's the massive blow axing CCS funding will do to infrastructure investor confidence. After all, if the government can kill a programme that has been over five years in the making just weeks before bids are about to go in, wasting millions of pounds of private and public cash in the process, why should any energy investor trust Ministers' plans for a new wave of energy infrastructure projects?

Perhaps it is the indication as to where decarbonisation stands in the list of the government's spending priorities. Having been provided with some fiscal wiggle room by the machinations of the Office of Budgetary Responsibility Osborne used the cash to get him out of a political hole of his own making and lavish spending on some pet projects, while killing off a crucial programme that required relatively modest levels of funding.

Perhaps it's the damage ditching CCS funding does to the UK's standing at next week's Paris Summit. Having cobbled together a vaguely presentable position at the talks thanks to increased climate funding and the promised coal phase out the government has reignited criticism that it is failing to back up its carbon targets with a proper plan for meeting them.

Perhaps it's the manner in which the Labour leadership's continuing descent into student politics irrelevance means the government knows it can insouciantly torch manifesto commitments without paying any meaningful political penalty. Jeremy Corbyn yesterday attempted to lay bare the incoherence at the heart of the government's current energy and climate strategy - once again, he barely laid a glove on the Prime Minister.

For me, the worst component of the government's CCS U-turn is the manner in which it seriously threatens to throw the UK's entire decarbonisation strategy into disarray.

For several years now CCS has been the fig leaf which the government has used to justify pretty much every controversial high carbon energy policy it has pursued. "Why are you planning to build more gas power plants at a time when we need to pretty much fully decarbonise the power sector?" critics asked. "CCS can solve that," Ministers replied. "Why are you looking to build a fracking industry and maximise North Sea production when we have to more than halve emissions by the early 2030s?" green groups inquire. "CCS can solve that," ministers countered. "Why are you exempting heavy industry from carbon costs," campaigners queried. "Because we want those industries to stay here and decarbonise over time," Ministers responded, "CCS can solve that."

This argument came right from the top. As long ago as 2007 David Cameron was telling a Chinese audience "green coal" in the form of CCS would be a priority for a Conservative government. "We will do what it takes to make Britain a world leader in this crucial field," he declared. More recently, when challenged on three separate occasions by the Liaison Committee of MPs to explain why the government would not support a decarbonisation target for the power sector for 2030 he argued repeatedly that we needed to leave the door open for new gas capacity on the grounds CCS could prove cost effective at some point in the 2020s.

It is also an argument that was endorsed, in part, by the independent Committee on Climate Change (CCC), which today published its proposals for the fifth carbon budget and again stressed CCS is very likely to prove critical to the UK's medium to long term decarbonisation efforts. Moreover, the government's own advisors made it plain CCS is highly likely to form a key part of the most cost effective pathway for meeting the UK's carbon targets.

Some environmentalists have said shelving CCS demonstration funding could be a good thing, given the technology arguably undermines investment in renewables and acts as an enabler for yet more investment in fossil fuels. However, this argument ignores a number of important points. Firstly, renewables and smart grids may outcompete CCS on cost, but the demonstration projects were about getting a better understanding of CCS costs so as to make an informed call on which technologies should be included in the 2030 energy mix. Secondly, CCS has the potential to deliver baseload low carbon power and without it the UK will be left even more reliant on nuclear projects, which without competitive pressure are more likely to see costs spiral. And thirdly, and most importantly, even if CCS ends up playing a minimal role in the power mix it could still play a crucial role in decarbonising industrial processes and eventually creating emissions-negative power plants in conjunction with biomass.

The simple fact is that without a credible plan for delivering CCS at scale some point in the 2020s the government's already shaky looking decarbonisation strategy starts to edge towards compete incoherence. Incoherence that has been made worse still by accompanying news yesterday the Treasury is to cut spending on domestic energy efficiency. As Jimmy Aldridge of the IIPR think tank observed: "With investment in energy efficiency reduced dramatically, new nuclear power stations stalled, funding for Carbon Capture and Storage (CCS) technology ended altogether, support for solar slashed, and wind farms blocked, it is very difficult to see what the government's strategy is for meeting the climate change targets the Prime Minister signed into law."

As always, there are some grounds for hope. Yesterday's continued commitment to renewable heat and increased innovation funding combines with the recent confirmation of a coal phase out and renewed support for offshore wind to provide some rare positive news for the green economy. Similarly, it is not beyond the realms of possibility that once the dust has settled from the screeching CCS U-turn, the government might come forward with a new strategy based on price support contracts that would allow carbon capture projects to proceed (although good luck finding investors willing to trust any ministerial promises of support).

More generally, as the government reflects on emissions projections that suggest the gap to meeting the fourth and fifth carbon budgets is widening with every month there remains the hope new technologies could yet ride to the rescue and deliver the deep emissions cuts that are needed. Who knows, by 2030 we could be running our homes and factories on small modular reactors. Stranger things have happened, although admittedly not much stranger.

However, as it stands the government appears to be pinning its long term decarbonisation plans on a 'hope for the best' approach that is both reckless in the extreme and economically senseless. It not only means future governments are likely to have to decarbonise at an even faster pace, increasing the overall cost of meeting carbon targets, it also means that if lower cost clean technologies ride to the rescue in the 2020s and 2030s they are likely to have been developed by our competitors, leaving the UK once again reliant on imported technology and expertise to drive its infrastructure. The huge economic and export opportunity offered by a clean tech sector that had been expanding fast will have been sacrificed on the altar of Osbornomics' defining political short termism.

Ministers have promised to look at the UK decarbonisation strategy once again next year and set out how we will meet the legally-binding fourth and fifth carbon budgets. But in the interim the assault on renewables, the reduced ambition on energy efficiency, and now the scandalous scrapping of CCS funding leaves the country's supposedly cost effective low carbon plans collapsing under the weight of their own contradictions.

The government could yet deliver a credible new strategy out of the wreckage they have created - one which, inspired by the strategies now being pursued by the likes of the US, Germany, and China, delivers economic and environmental benefits alongside investment in cost-effective cutting-edge clean infrastructure. But after the past few days you will forgive me for feeling cynical. 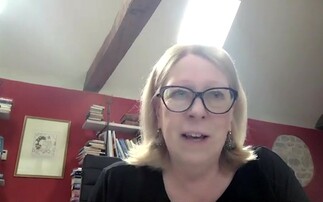