Have the Greens been green enough?

In the first of a series of blog posts on the election campaign, James Murray asks if the Green surge has delivered

Anyone looking for a way to sum up quite how bizarre this election campaign has become would do well to reflect on the fact the Green Party is currently facing serious questions about whether it has been green enough.

During her latest grilling on the Today programme this morning, party leader Natalie Bennett was asked why the Greens had not done more to highlight their environmental policies and use the extraordinary platform they have been offered to promote their "raison d'etre". Thankfully, Bennett avoided a "brain fade" (the entry of which into the political lexicon represents the Greens' least welcome achievement of this campaign) and highlighted how the Greens promise serious action on energy efficiency and low carbon transport systems. But the criticism inherent in the question about the Greens' willingness to downplay some of its climate policies will resonate with many environmentalists and green business leaders.

The party's decision to focus on an anti-austerity message, making common cause with the SNP and Plaid Cymru, while offering a genuine left-wing alternative to Labour undoubtedly played a role in driving the "green surge". Moreover, the party performed a valuable democratic function, providing a reminder of the argument - expertly elucidated by influential economist Paul Krugman this week - that the coalition's austerity programme has had little credible economic rationale. But the Greens' unwavering focus on ending austerity, punctuated by populist policies on rail ownership and house-building, feels like a missed opportunity for those who wanted to see climate change and the green economy pushed up the campaign agenda.

It is not as if it would have been difficult to deliver a pitch that offered a balance between the Greens' two core messages of environmental protection and a fairer society. Green quantitive easing to mobilise investment in low carbon infrastructure, the energy efficiency programme Bennett name-checked this morning, and a bold overhaul of the tax system to shift the burden from income to pollution could all have been given more airtime in a way that reinforced, rather than diluted, the anti-austerity rhetoric.

A clearer focus on environmental policies would not only have ensured the Greens better performed their crucial role as the one party that engages fully with the true scale of the environmental challenges the UK faces. It may also have forced the party to look again at the envelope-pushing policies that fuel the impression many in the party are happy to stay on the fringes of British politics.

The tragedy of the Greens' campaign is that radical policies that are not actually that radical and command significant public support - such as calls for bolder climate action, low carbon stimulus funding, rail nationalisation - are hampered by genuinely radical policies that are too easy to characterise as unviable and unpopular, which then undermine the credibility of the whole programme. Add in the well documented presentational challenges the party leadership has faced and it has felt at times as if the party is still punching below its weight.

It is fascinating to wonder where the party would be in the polls had it tempered the policies that were too easily spun, unfairly but predictably, as equating to "banning the Grand National" or "appeasing ISIS", throttled back on some of the anti-business, "soak the rich" rhetoric, and offered a still ambitious but properly funded anti-austerity vision for a greener economy. For what it is worth, my bet is the party would have retained much of the support it has already secured and found it a lot easier to tempt away those disaffected Labour and Lib Dem voters who currently baulk at the Green's more extreme policies.

It is this failure to provide a more meaningful nod towards both environmental policies and the political centre, coupled with the unfairness of the electoral system, that will see many green business executives resist the appeal of a party that in many respects should prove a natural ally. The Greens are significantly more pro-business than they once were, and the party argues that it is anti-corporatism, rather than anti-business. But the reality is that many business leaders, green or otherwise, still feel like the party doesn't understand the business world and is resistant to the clean tech innovation and social benefits it can and does offer. The Greens are perfectly entitled to attack capitalism's weaknesses, but a clearer recognition of businesses' genuine strengths would only have strengthened the party's overall standing.

It has been the most high profile Green campaign in decades and if it results in the re-election of Caroline Lucas and a strong second place in a couple of other target seats it will be hailed as a success. Depending on the parliamentary arithmetic the party could yet get its wish of being able to push a minority government to strengthen its climate policies - particularly if it forms an informal alliance with SNP and Plaid Cymru and their pro-renewables, anti-fracking stance.

But it still feels that a combination of slicker presentation and beefed up policy credibility would have kept the Green surge rolling and ensured the majority of people who want to see a greener economy were better represented at this election.

Who deserves the 'green business vote'? Boris Johnson: 'We are approaching that critical turning point' 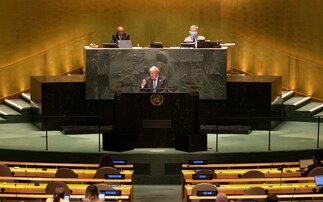 'It is time for humanity to grow up': Boris Johnson delivers COP26 plea to world leaders